Inside The Magic Castle 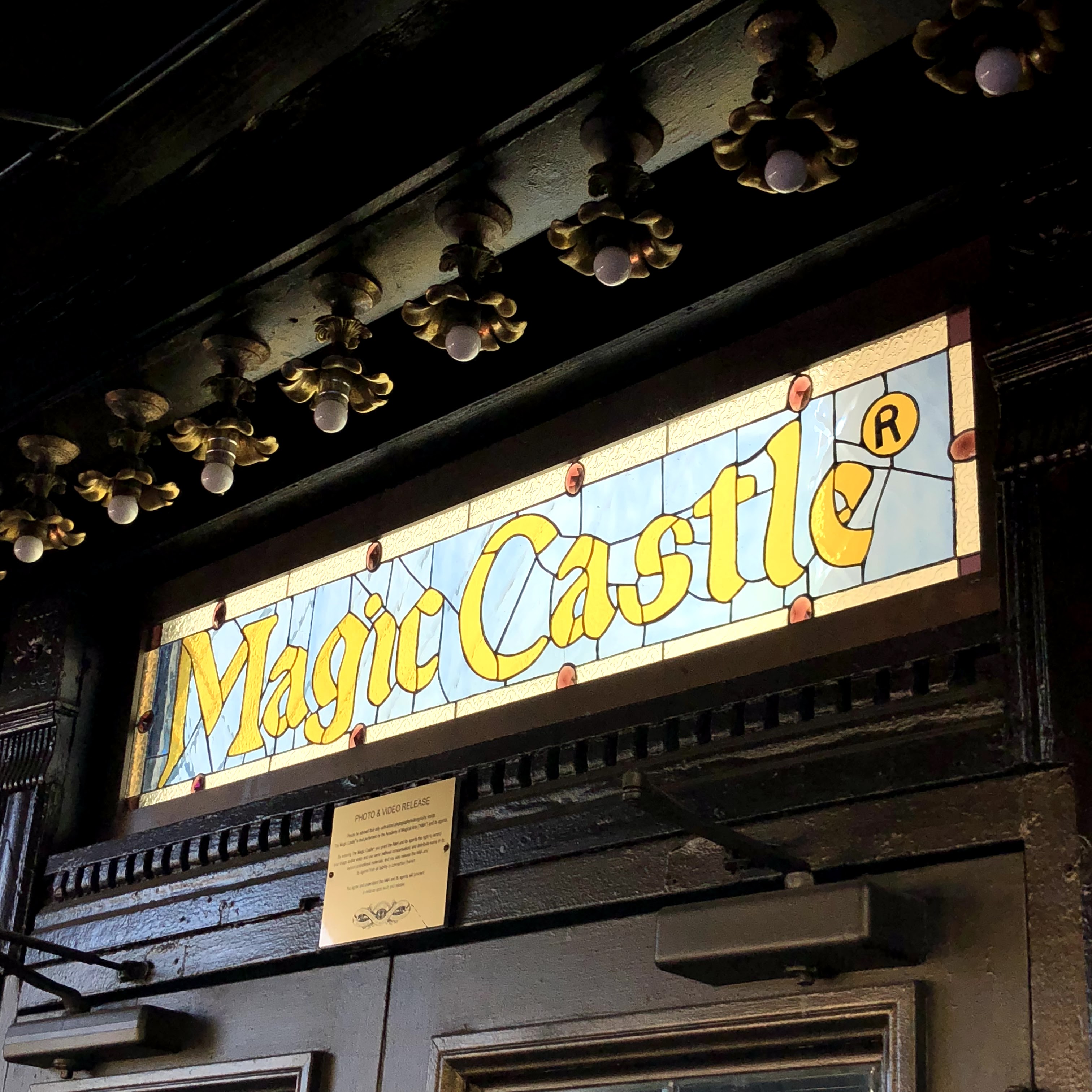 I am not ashamed to say that I actually, earnestly, believe in magic. I’ve seen magic too many times in person to walk away a skeptic. I may in fact be too lazy to research how the magic is performed, but for the time being I’ll tell myself and all others that I simply choose to believe. I choose not to destroy the illusion by spending hours stalking magicians’ online fora and/or magic-shop websites in order to derive the secrets of the magical universe. I choose to accept that wizards are among us. Moreover, I believe that they choose to reveal their powers to hordes of the curious at regularly scheduled intervals within the bowels of a faux chateau in Los Angeles, immediately following an affordable and surprisingly good buffet brunch.

As Players, we have been extended an invitation by the Academy of Magical Arts to enter their inner sanctum, the 55-year-old clubhouse colloquially known as the Magic Castle and billed as “the most unusual private club in the world.” Here, some of the country’s foremost professional and amateur magicians assemble to swap stories, drinks, and the odd trick or two, and raise more than a glass of spirits at their seances in the Houdini Room.

I made a point of checking it out on my last trip to Los Angeles: I'm a Player, aren't I? I can’t resist a memorabilia-filled private club with a quirky history. It’s an incredible privilege to be permitted guest membership at so many interesting clubs around the world, and the Magic Castle has to be one of the most spectacular. After requesting a Letter of Introduction from our own club, it was a simple enough process to make a reservation for brunch and a show that weekend. The friend I was traveling with was thrilled to be invited (thanks for the street cred, Uncle Edwin!).

The process of actually visiting the club was a more puzzling matter. For one, they certainly have a lot of rules concerning the behavior and attire of the uninitiated; you may want to do some pre-reading before showing up. They also have limited parking and a hectic valet system, so I’d advise taking a rideshare or taxi. If that also means you can enjoy more than one mimosa, hey, win-win! The illusion of exclusive membership was slightly tarnished that day by the crush of fellow tourists at the door, many accompanied by children. (Little ones are only admitted for weekend brunches, so attend in the evenings for a more grown-up experience.) Once we made it to the reception desk, the small foyer had emptied out. It was as though the crowd had simply disappeared; we could not see any means of entry to the wider club beyond the desk. The staff directed us to look to the bookshelves along the wall to our left, cluttered with books, taxidermy, and magical detritus. It looked like something out of (forgive me) Harry Potter. We were to ask permission to enter from a stuffed owl on the shelf. There’s a passphrase. I won’t give it away but it sounds remarkably like “Mopen Mess-a-me.”

It would take nearly a lifetime to describe everything we saw inside. In the way that our dear clubhouse is filled top-to-toe with mementos of the theatre, so is the Magic Castle stacked with magicians’ bits and bobs. Pseudo-cursed-looking doorknobs and gargoyles litter the place, while bar after bar is decorated with trick elements and posters for magic shows of yore. The décor is truly an homage to the magician’s craft. Imagine the Disneyland Haunted House crossed with the creepy artifact room from the classic 1959 film The Shaggy Dog. But, hopefully, here no one will hold your curiosity against you or curse you to be hairier than you already are. I only wish I had pictures to show you. Unfortunately, I’m a rule follower by nature and photos are forbidden inside, so what you see at the top of this article is all you’ll get from me. Do an online search about the place and you'll see more of what I’m talking about.

Our schedule involved brunch first, then a show in the theater on the lower level. The servers were friendly and attentive, topping up our mimosas regularly and finally just leaving the bottle of Prosecco when the pace of refilling became too strenuous. The dining rooms (there are several) include lots of different stations, with everything from pasta to waffles to custom omelettes to ice cream and a raw bar. I was happy, my friend was happy, the children with whom we fought for cookies also seemed happy. Their parents were happy to let them run around. The atmosphere was excited. We were all anxious to get to the magic part.

The servers kept note of the timing of our scheduled magic show and directed us to the correct group at the appropriate time. We proceeded with other eager patrons into the basement area, where we were funneled into a velvet rope-lined holding pattern. Finally, the doors opened and we flooded into the theater. We did the traditional search for seats with a good view, not too close to the front lest we be chosen for “audience participation” against our will, and not behind anyone too tall. The seating in the theater was generally good, with a clear view of the stage and no obvious obstructions like pillars. The first act was what you might think of as a typical magician, offering a sort of 80s-style magic that involved scarves, roses on tables, mirrors, and cutting people in half. However, his twist on these classics was the one that always gets me – the illusion goes “wrong,” then it’s resolved in an even more unexpected and spectacular way.

I still think about the second performer we saw. This guy was just a kid! I mean, he was an actual teenager. One of the wonderful things about the Academy of Magical Arts is that they offer classes and mentorship to budding magicians. This also includes the ability to perform for, and bedazzle, audiences at the Castle once one’s skills are refined enough. This young magician’s name is Zac Swan. Look him up. He’s really good. His work, and that of others like him, is the future of magic. I’m honestly no connoisseur, but his performance felt like a very modern update on some of the old classics. Moreover, he came as close as I’ve seen to actual, in person, “is this really happening right now?” sorcery.

The moment that has stuck with me since I left that clubhouse involved some audience participation. Mr. Swan called a young girl out of the audience and asked her to pick a card out of a deck. She selected one and held it close. The magician then took an easel from somewhere on the stage and began drawing a rectangle in permanent marker on a large sheet of paper. He added some perspective to the rectangle to make it clear that he was drawing a box, as for a deck of cards. He added lines along the top and sides to denote the cards in the deck. Then he began to wave at the page. He worked his hands up, up, up, coaxing something toward the ceiling. The only way I can describe what I saw then is that a card drawn in permanent marker on the page began to move out of the middle of the “deck of cards” as though it were being pulled skyward by fingertips. The edge of the card moved up, and a suit and number came into view in the top left corner. Mr. Swan asked the girl which card she had selected. It was the same. The audience exploded. The magician signed the drawing and gave it to the girl to keep.

Later, as we were poking around the gift shop in the lobby, once again on the outside of the secret world, I spotted the little girl clutching her drawing from the show. It looked just as it had when the young magician handed it to her. I asked her if I could take a look at it, and ran my hand up and down the page. I felt only paper and smelled a faint scent of dried permanent marker. There was no trick flap, disappearing ink, or secret double side to the page. The drawing was really real. It was magic, but it was real.

Fiona Finlay-Hunt is a technology and intellectual property attorney, lover of theatre, and member of The Players since 2018.

Hooked On A Triumph

Jolson And My Dad